Web-based technologies are increasingly being used in a wide range of public health applications such as disease surveillance, outbreak detection, research and communication of public health messaging [1–4]. Still, much research remains to be done to determine when and how web-based tools can be most effectively utilized. Here we outline the role that two web-based technologies played in the detection and investigation of an outbreak and potential reasons for their usefulness.

A large campylobacteriosis outbreak affecting 225 people was associated with a June 16, 2007 mountain bike race in British Columbia (BC), Canada. The investigation identified ingestion of contaminated mud as the likely source of illness [5].Two web-based resources were used in the outbreak investigation: an existing mountain biking web forum, and an online questionnaire.

There was a pre-existing web forum for mountain biking in BC with a discussion thread specifically related to the bike race of interest. The first postings regarding ill racers appeared on June 18, two days after the race [Figure 1]. Further postings about ill racers prompted the race organizer to contact the local health unit on June 20th. The first reports of laboratoryconfirmed Campylobacter jejuniamong racers were received by the local health unit on June 25, at which point an investigation was initiated.

Between June 18th and July 6th 2007, there were 100 race related posts. Of these, 58 entries posted by 34 individuals specifically discussed the issue of ill racers. Prior to the design of the online questionnaire, the web forum was reviewed to identify potential exposures of interest. Racers discussed inadvertent mud consumption, foods consumed, and the use of a common cloth to wipe riders’ faces. Additional useful information posted to the forum included the fact that some racers did not complete the race but became ill, some used fenders and others did not, and that there were different types of water delivery systems used, including water bottles and personal hydration packs. Additional postings and photos also informed investigators of the conditions of the race course and the extreme mud coverage of racers’ hands and faces.

A qualitative analysis of the web forum discussion thread was conducted to explore possible reasons why it was a useful source of information in this investigation. Some individuals who participated in the race-specific discussion joined the forum as early as 2002, revealing that they had been part of a virtual community for some time. The analysis also revealed that the thread was not moderated and that participants were willing to share personal information such as their symptoms, photos and knowledge of illness in fellow racers. For example, one rider said “Did anyone else who raced get sick yesterday/today? … Symptoms are (and they are ugly) non stop washroom visits that are far from normal, extreme fatigue…unable to eat, drink and sleep”.

An online questionnaire was designed as part of a cohort study to investigate the outbreak. The questionnaire took less than 48 hours to design, set-up on the web using Ultimate Survey Enterprise.NET (v3.0.7) software and pilot. As racers required an email address for race registration, a web link to the online survey was sent by email to the 787 race participants.

Responses were given a time stamp: within two hours, 69 responses (13%) were received and in 48 hours more than half of the total responses (n=293) (53%) were submitted. An increase in responses was seen on July 5th following an email reminder sent to race participants [see Figure 1]. Data were quickly extracted and preliminary analysis conducted to direct environmental sampling. 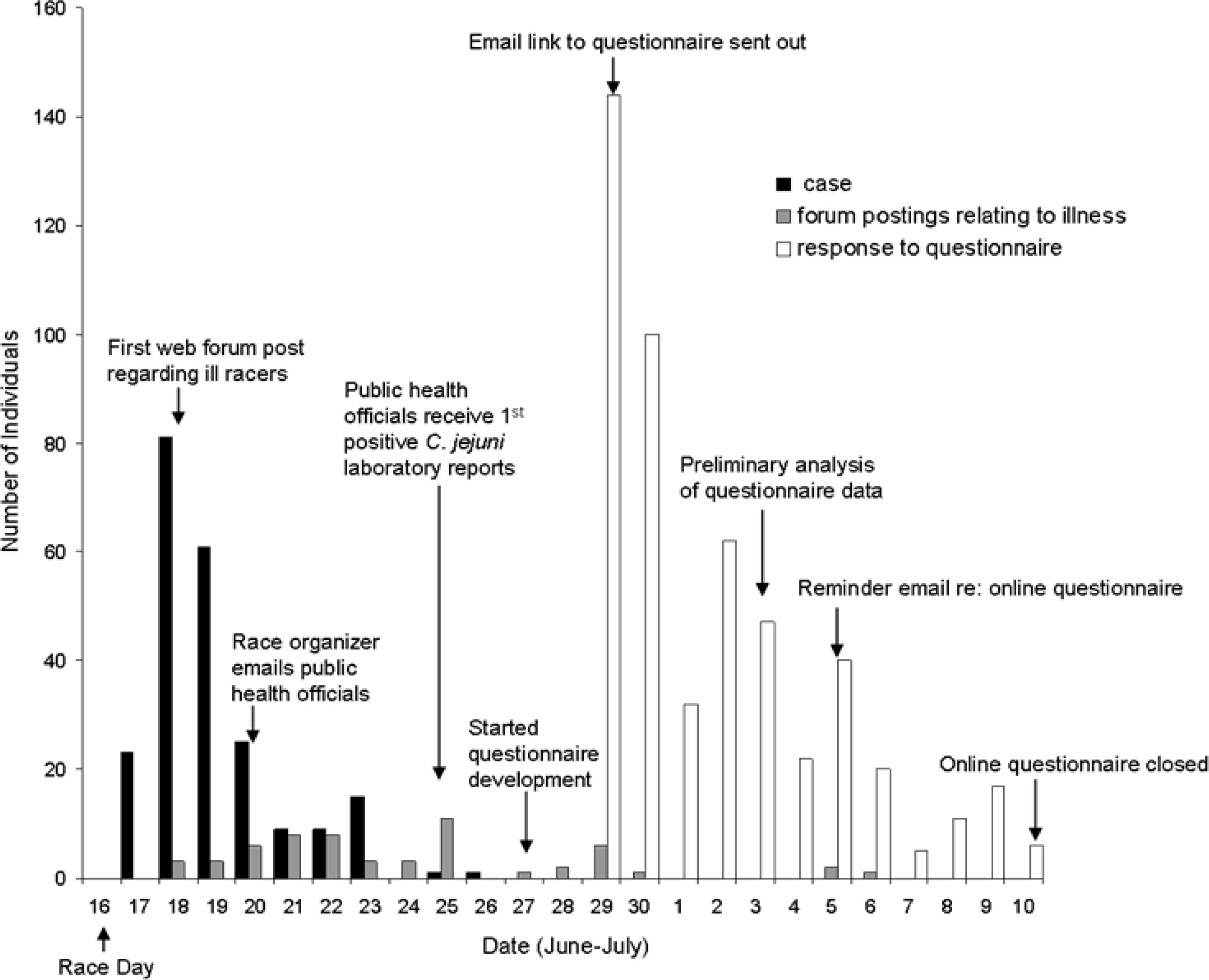 Dates of occurrence of significant events (outbreak detection, web forum postings and online questionnaire responses) in the investigation of an outbreak.

In the present investigation, the feeling of comfort and community in the well-established, non-moderated web forum potentially contributed to the sharing of personal and detailed information, which made the forum useful to investigators. The impact of an outside moderator in virtual communities is unclear [6,7]. Moderation could possibly impact participation and the type and amount of information shared.

The nature of the web forum may have led individuals who would not have sought medical attention and laboratory testing for their illness, to still discuss their symptoms in the forum. The discussion of illness in race participants in web forum postings brought the outbreak to the attention of the local health unit five days prior to notification of any C. jejuni positive laboratory results. Although in this instance the investigation was not initiated earlier, it demonstrates the capacity of web fora to aid in early outbreak detection.

In this outbreak, web forum postings also aided in hypothesis generation by suggesting possible routes of C. jejuni exposure and providing useful information regarding the race and mountain biking that investigators may not have originally considered. To the knowledge of the authors a web forum providing this type of contextual insight into informing an investigation has not previously been reported.

Several factors may lead to a high response rate to online questionnaires. Internet access and comfort with online tools are prerequisites [14]. The target population in our study had features suggesting a familiarity with internet tools. All race participants had active email addresses as evidenced by the requirement for email registration for the race. The existence of and participation in a race-specific discussion thread on a web forum also suggests that many racers were internet savvy. The ease of completing the online questionnaire may also have contributed to the high response rate.

A strong sense of community combined with high attack rates amongst members of that community may increase interest and participation in an outbreak investigation. A high response rate (96%) to an online questionnaire was seen in a norovirus outbreak linked to a dinner reunion where the attack rate was 73% and attendees likely also had a strong sense of community [12]. In the present investigation, the majority of racers were from BC, with many living in the race community, and many racers were part of a virtual community. The relatively high attack rate (42%) in this outbreak also meant that many individuals were either personally affected or knew someone who was. In contrast, in an investigation of a salmonellosis outbreak following a sporting event involving athletes and spectators from numerous states and therefore likely less sense of community, coupled with a low attack rate (22%), the response rate to the online questionnaire was only 34% [10].

The usefulness of web fora and other social media sites in outbreak investigations is clearly dependent upon the ability of public health professionals to identify and utilize these resources in a timely way. Although it was found to be very useful, one limitation of the web forum in this investigation was that it was only one source of information from a small number of participants. Our assessment of potential reasons for the success of the online questionnaire was limited by the fact that we did not ask respondents what motivated them to complete the questionnaire. Additional limitations of our online questionnaire, compared to phone based interviews, include the fact that respondents could not ask for or be prompted for clarification. In order to help ensure completion we also limited the length of the questionnaire compared to what may have been created for a phone based interview.Analysis of the online questionnaire response times was limiteddue to technical difficulties.We were only able to capture time stamp information for506 of the 549 completed questionnaires.

Internet technologies can play a role in the identification and investigation of outbreaks. Public health officials should consider web fora potential sources of not only early signals of outbreaks but also resources that can provide contextual insights to inform investigations. With the proliferation of social media in most facets of daily life, public health professionals need to be cognizant of their application in investigating and responding to adverse community health events such as outbreaks. The highly accessible and scalable nature, as well as immediate reach provides an essential platform for public health communication in this era. In this situation the web forum was not developed or owned by public health and public health specialists chose not to directly intervene. In certain situations identifying or developing public health informatics applications to alert a community at risk using web forums and other forms of social media could be useful. It is also important that public health professionals have the tools available to rapidly create and utilize online questionnaires when needed.Online questionnaires can successfully expedite data gathering, especially among an internet savvy cohort where there is a sense of community and a high attack rate, thus making them a valuable tool for public health investigations.

We would like to acknowledge Jayne Corder for her assistance with the development of the online questionnaire as well as Paul Martiquet, the MHO with jurisdictional responsibilities for the outbreak.Thank you also to Cliff Miller, the race organizer, for bringing the web forum to the attention of the local health authority.