It is well known that vaccination is one of the most successful public health initiatives to date, and having a successful immunization program is paramount to preventing vaccine-preventable diseases (1–3). However, today’s vaccination delivery system is insufficient to keep up with the demands of an ever-changing landscape (3,4). To address this need and ensure adherence to recommended vaccination schedules, immunization registries are increasingly being utilized. This brief defines immunization registries (more recently known as immunization information systems) as population based electronic information systems that minimally capture and report vaccination events.

Studies have already demonstrated the use of regional registries increases vaccination coverage and documentation (5,6). Additionally, decision support capabilities, such as patient and provider reminders, provided through electronic information systems can improve up-to-date (UTD) rates (7). Participation in registries, or the number of children with vaccination records, has been steadily increasing (8). Despite this, the question remains among children recorded in the registry, are they UTD on their vaccinations? And, if a higher percentage of UTD vaccines indicate a more robust registry, what are the contributing factors to this increased coverage? This brief considers these two questions.

Relevant articles were identified via a PubMed search using the following keywords: (immunization registries OR immunization information systems) AND (UTD OR up-to-date). The keywords “accuracy,” “completeness,” and “coverage” were used in lieu of “UTD OR up-to-date” for subsequent searches and generated additional articles. Literature searches were limited to studies in humans and published in English. As no date limits were applied, studies available through August 2010 were eligible. Figure 1 is a graphical representation of the methodology. 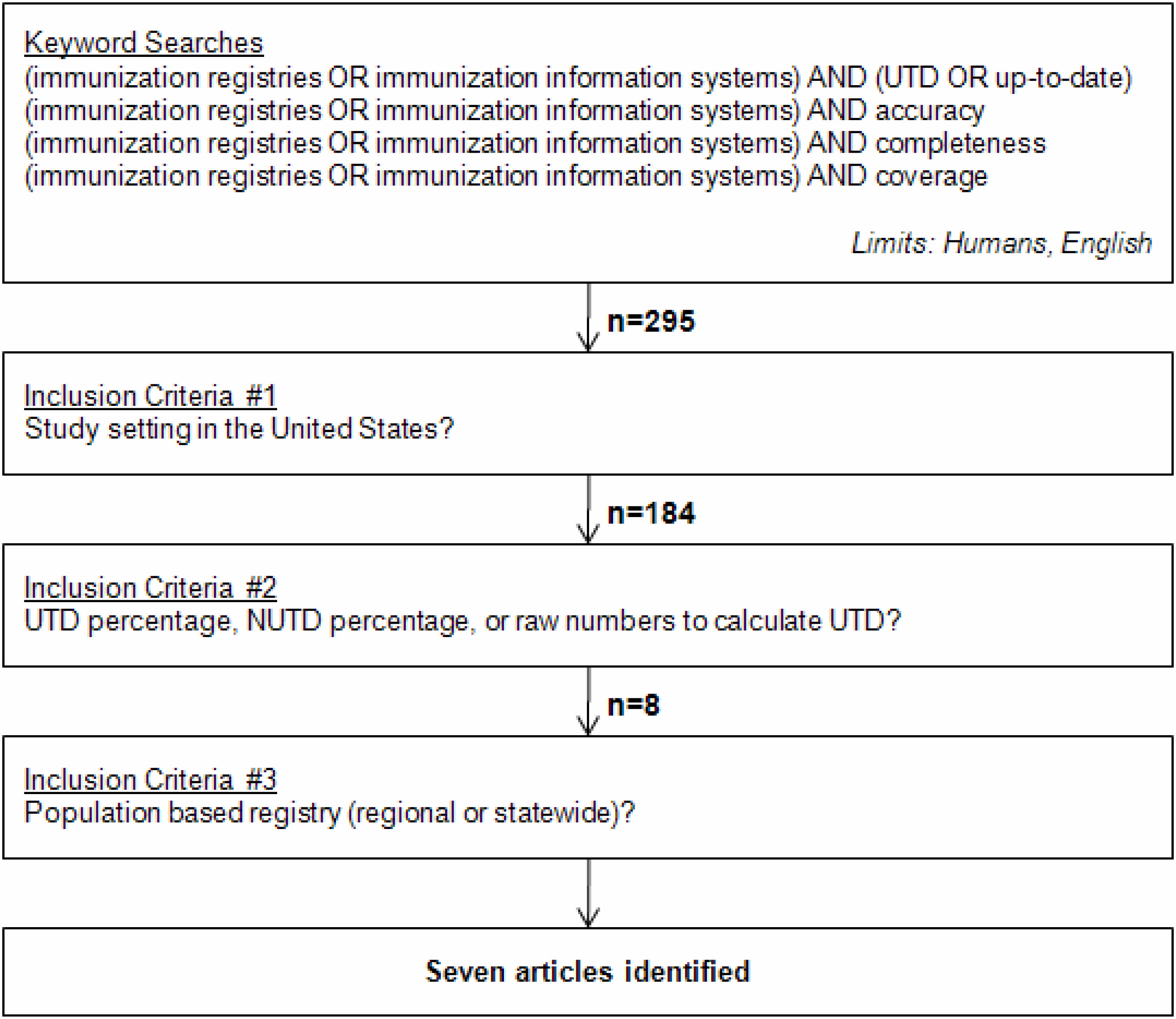 
Three inclusion criteria were applied. First, the study setting was based in United States. Second, the study investigators included a vaccination up-to-date percentage, or the raw numbers from which the percentage was calculated, and third, the immunization registry was population based (that is, a hospital’s electronic medical record was excluded). These inclusion criteria yielded seven articles which we believe represent the body of published work on UTD coverage in an immunization registry at the time of writing (9–15).

The seven articles were all unique studies covering various geographic regions, and consequently various regional and statewide immunization registries. Therefore these results are experiences with not a single registry, but myriad registries each with its own population of patients and providers. Table 1 summarizes the seven articles by study type, population, and setting; outcome measure; and UTD results.

Summary of Articles for Vaccination Coverage in Immunization Registries Review

When determining immunization status, the study investigators have used a subset of the U.S. Department of Health and Human Services recommended vaccinations (16) depending on various factors, such as subject age, ability to track antigens in the registry, antigen availability, and local preferences. While the studies reviewed mainly used different vaccination series dependent mostly on age, a direct comparison is still valid as we are tracking immunization completeness in the registry, and are not interested in comparing antigens tracked per registry. Supplementing U.S. vaccination policy, the World Health Organization (WHO) has issued the Global Immunization Vision and Strategy aiming to achieve a 90% national coverage and 80% local coverage (17). Although desirable to evaluate the results in Table 1 against WHO criteria, a direct comparison may be misleading as children in registries represent a specific subset of the total population.

The two most common series based on the study subjects age included the 4:3:1(:3) series and the 3:2:2 series. The 4:3:1(:3) includes 4 Diptheria, Tetanus, acellular Pertusis (DTaP); 3 Polio (oral or inactivated); 1 Measles, Mumps, Rubella (MMR); and 3 Haemophilus influenzae type b (Hib). The 3:2:2 series includes 3 DTaP, 2 Polio, and 2 Hib. The 3:2:2 series may also be recorded as 3:2:3 indicating a third Hib vaccination, depending on the age and eligibility of the child. Additionally, for both series, the Hepatitis B vaccination may or may not be considered in the study.

The current state of registry coverage was ascertained from the available literature. Registry completeness ranged from 31.7% to 83.1%, whereas paper charts ranged from 39.8% to 81.6%. In studies where registry data were compared to provider charts, the charts were more inclusive of vaccination events. In all cases, when provider charts were supplemented with registry data, the UTD percent increased. This is an important finding; registries can augment the patient chart to provide a more inclusive look into vaccination UTD rates, particularly for children that have switched providers who may have incomplete histories.

Many factors can affect vaccination coverage both in paper charts and electronically, and it is currently not clear which have the greatest effect. One study that attempted to determine which factors were associated with low coverage found that the level of coverage was not well predicted by number of providers per capita, a common assumption (18). Specific reasons were attributed to registry incompleteness. Kolasa observed lack of electronic data submission resulted in a disparity of completeness between the registry and charts (9). Studies have shown electronic submission results in greater accuracy (8,9,19). Additionally, Kolasa found that hospital-based practices, which typically have a more robust infrastructure, have a higher UTD percentage versus smaller practices. Davidson posited the infancy of a registry explains why historical immunization events captured in provider charts are not electronically accessible (12). It stands to reason over time that electronic immunization data will increase.

There are several limitations to these studies. First, by consulting a registry, the practitioner assumes accuracy of the reported data. Callahan notes “[t]his has been shown to be a problem with registries in their current state of development” (14,p300). Indeed, Kolasa found among children listed in the Philadelphia registry as being not UTD on their vaccinations, 64% were found to be UTD from charts (15). Stille had similar qualms with the Connecticut state registry; specifically vaccinations received by un-identified providers cannot be tracked and children who have relocated outside the reaches of the registry may be erroneously reported as not UTD (11). Second, study populations were frequently drawn from underimmunized, “at risk” populations who visit public providers, potentially affecting the external validity of the results. However, since the underlying technology of the registry is the same regardless of the provider, it is reasonable to expect the findings to generalize. An opportunity exists for additional studies to assess particular “at risk” populations, such as low birth weight and immunocompromised children, and use of electronic registries to decrease mortality. Last, UTD percent may not be an accurate metric for studying immunization coverage. In a study by Robison et al., the UTD measure served as a general guide, but does not provide a reason for the low coverage (21).

There are limitations to the methods used to conduct this literature review. The registries considered for inclusion had to be population based. By disqualifying a hospital’s electronic medical record, we feel the population is more inclusive of the total vaccinated population, not just children that have presented to a hospital likely for other indications. Next, our search strategy may have excluded relevant articles, although we feel the searches incorporated the totality of keywords used to index these articles. Finally, only studies that were U.S.-based were eligible. Given the immunization policy and tracking differences observed between countries, this allowed us to draw conclusions specific to the U.S.

Percentages of UTD children in immunization registries are lagging compared to provider charts. To accurately assess a child’s true vaccination status, a combination of the registry and providers charts provides the best picture. Registries that offered decision support, broad participation, and efficient electronic reporting of vaccination events tended to have a higher proportion of UTD children.

The authors have no conflicts of interest to disclose.